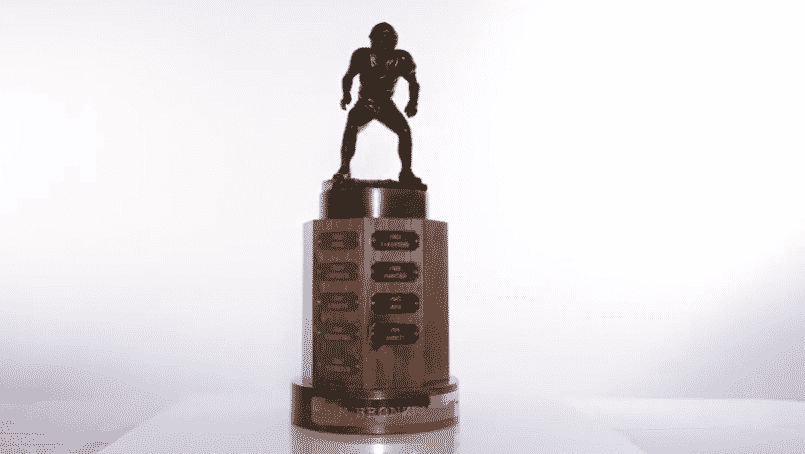 A fantasy football league is a great way to have fun with your homies. However, without any rewards, some may find the games a bit lacking or even boring. Because of this, having a fantasy football trophy as a reward for your own backyard championship is a great way to motivate your friends and create many Instagrammable moments for your whole gang.

The following products are among the best fantasy football trophies you can find on the market. Have a look and choose the best one as a reward for your next fantasy league.

This fantasy trophy can be a great choice for ornamental purposes and also an excellent source of fun for your self-organized competitions.

The best thing about this handheld trophy is that it can be customized by having your league’s name laser-engraved on it, creating a unique, authentic feeling. In addition, up to 4 nametags can also be added on the trophy, making it more meaningful for winners who receive it as a reward for their effort.

The only drawback is its plastic material, which can be prone to wear and tear without proper maintenance. However, this can be easily be solved if the trophy is carefully stored, either in a cabinet or on your bookshelves. Although some may find it a bit expensive to buy, the trophy is great for making your fantasy league look more professional and therefore is a good value for money.

A prestigious award such as this Decade Awards Fantasy Football Silver Tower Trophy is definitely a good choice for those hoping to throw a fantasy league of their own.

Unlike our first pick, this trophy is more durable as it is made from cast resin. In addition, with its 14.5. inches large design and a weight of 3 pounds, the trophy can surely offer an authentic sense of achievement for its holder. What’s more, it also allows some customization such as having the name or logo of your league engraved on it.

Although this engraving is offered free of charge, the trophy itself is quite pricy so your whole group may need to chip in. However, it is well worth the expense judging from the quality and prestige it offers.

This massive 26-inch trophy is an ideal choice for those looking for something that can provide the ultimate sense of achievement for their fantasy football league.

One of the greatest selling points of this trophy is its durability as it is stated by the manufacturer to last for no less than 19 years, which means you can have it on your bookshelf for many years after the game and treasure the memory you have had with it. This durability is facilitated by the anodized metals used as its materials, making it resistant to decay or rust.

The trophy is also available in a wide range of colors, and the ability to customize it with your own engravings is also a plus point. Although it is quite expensive and the engravings are not free of charge, the trophy is well worth your money for the amazing features that it boasts.

As its name suggests, this trophy is highly customizable using laser engravings, which are offered free of charge for the first time. There are room for up to 16 name engravings as the trophy is promised to last for at least 16 years, so you can surely use it for many years to come without worries.

Although it is a bit smaller compared to our previous pick, this trophy still resembles lots of authentic football trophies with its height of 15 inches, allowing it to offer a sense of real achievement for anyone holding it.

Besides, this trophy is more reasonably priced, making it a much more attractive option.

This is a great addition to normal big-sized trophies for your fantasy league as you can give this away as a participation trophy.

This plastic trophy features a unique bronze design to give it a prestigious look, and the 6.5 inches small size means that you will not have a hard time finding somewhere to display it.

However, since it is a bit small, there is only room for a few letters to be engraved on. Despite this, it is still a good value for money and a good way for everyone and to treasure the memory they have with their teammates.

This multi-purpose trophy can be used either as the main reward or one that is given to winners of specific categories throughout the league. In addition, the polyresin cover that protects the plastic inside also makes the trophy more durable than most of its counterparts on the market.

With a bobblehead player that stands on top of the base, this trophy also features a silver-like look that makes it more eye-catching. In addition, you can also get the winner’s name laser engraved on it for free.

Although it is quite small, only 5.5 inches, the trophy is highly durable and available at an affordable price, making it ideal for those who are on a bit of a budget.

With its unique tower design and durable polyresin construction, this silver-colored trophy is definitely a great choice for your next fantasy league.

This 12-inches tall trophy is fully customizable. You can have the winner’s name engraved directly on the main plate, and several side plates can also be added thanks to the length of the trophy. However, the addition of such engraving plates might diminish the trophy’s uniqueness, but it will somewhat resemble a Super Bowl trophy, creating a cool sense of achievement for its holder.

Another plus point is that this trophy is quite affordably priced, making it an attractive option for league holders that are on a bit of a budget.

This is an interesting alternative to your conventional trophies as it features a cool design that can give everyone a good laugh upon receiving it.

Although it looks might not suits a major league reward, you can give this 6.75-inches tall trophy away as incentives for minor categories like best defensive team or best rushing yards. Alternatively, you can give it away for ones with the best performance throughout a week. The possibilities are endless with this item.

Another plus point is that this trophy is very affordable, allowing you to purchase them in bulk and use throughout your league.

Another trophy from Decade is the Fantasy Football Silver Goal Post Trophy, which features a unique, silver-colored design that can catch anyone’s attention.

Although its 7-inch height may not make this a good match for your league’s main trophy, it can be a good choice for minor categories or a participation trophy for everyone to bring home. It is also fully customizable as special engravings can be added to your preference.

The only drawback is that its small size does not allow room for many names to be engraved on, but it is among the most affordably priced options on the market.

This trophy has one of the best designs among our recommendations with its gold color. However, because of such a unique design, there is not much room for engravings. The only things that can be added include the category and its winner’s name.

However, this 7.5-inches tall trophy is still a great choice with its durable polyresin material and a solid base. In addition, the symbolism of this trophy also makes it suitable for several minor categories like best young player or best performance.

Besides, it is also very affordable, making it a much more attractive option.

I am sure everyone’s attention will get drawn by this funny trophy. It is an excellent choice for awarding the losing team in your league, giving everyone something to go home with.

This is among the smallest trophies that you can find as it comes at only 5 inches tall, allowing it to be easily stored anywhere in your house. Although people may try their hardest to avoid getting this trophy due to the mockery that comes with it, you will still get a good chuckle with your friends holding this trophy.

Besides, it is also very affordable, so even budget leagues can also get one for themselves.

Criteria to consider before purchasing a fantasy football trophy

Just like any other products, you need to know the important selection criteria before buying a fantasy trophy. Have a look:

There are several types of trophies. Not all of them are the same. You need to understand the purpose of each type to make the best purchase decision. The most common types include champion trophies, major trophies, weekly trophies and loser trophies.

Whether your trophy can last for more than just one season entirely depends on the materials used to make it. The most durable are anodized metal trophies as they are rust-resistant and therefore are more long-lasting.

A trophy with room for several engravings allow you to use it again and again without having to buy new ones every season, which can be quite pricy for most budget leagues.

There are various trophy designs that you can find on the market, but the most common ones include Super Bowl, Single Player, Beast and Toilet designs. Each design has their own purpose as mentioned in our recommendations. You need to fully understand the purpose of your trophy to choose the most suitable one.

This is among the most important criteria as it directly affects your decision. A fantasy league usually has a limited budget, so finding an affordable one is vital for first-time league holders. However, an expensive trophy carries more prestige, which can be a great source of motivation for players.

With all the valuable information provided in this article, we hope that you can finally find the most suitable trophy for your own fantasy football league. Leave a comment for us to know what your final choice is!